Anne and Jeff Smith were unable to attend this evening. To help keep the task force informed, Jeff sent a couple of emails in advance of the meeting. They are summarized here:

The church continues to receive monthly donations of $100 from a person who lives in Twinsburg. She has faithfully been donating to the Sanctuary Fund in support of Leonor for a few years. Another person donated $500 to the Sanctuary Fund at the end of March. With funds available, Jeff is able to send Leonor Garcia financial support monthly. He believes the balance in the Sanctuary Fund remains at $1,209.

Emmanuel has been working a fair amount so he has money for his personal living expenses. Jeff asked for ideas on how Emmanuel’s iPhone can be inexpensively upgraded to at least an iPhone 7, either through a purchase or donation.

The task force met on Zoom for an hour. Here is a summary of their deliberations.

The Task Force supports the purchase or donation of a new iPhone for Emmanuel.

Sharon spoke to Leonor Garcia recently. Things seem to be going well in general. The application for Jose is proceeding. Eric is graduating from high school soon. Leonor wants to do another party like what was done for her wedding last fall but have this party be for Eric and Aidan; Eric in honor of his high school graduation and in celebration of Aidan’s birthday this summer. Details forthcoming.

The next meeting of the Immigration Task Force is July 23 at 7 p.m.

Issoufou, Idrissa, and Emmanuel have found many interests to keep them busy this summer.

They have had numerous landscaping jobs with both members and friends of members of Forest Hill Church. With each new job they are gaining confidence in their use of the English language, at least in the area of gardening. They now know about weeds, roots, edging, rototilling, shoveling yards of leaf mulch and soil, turning over beds, trimming bushes and planting. They have tidied up many a garden.

They have also been working hard at learning English. With both morning and afternoon ESL lessons with our dedicated volunteers several times a week, they are able to communicate quite well.

They have also been playing pickup soccer and riding their bikes around town. Here are a few pictures of them hard at work. 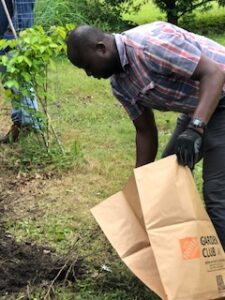 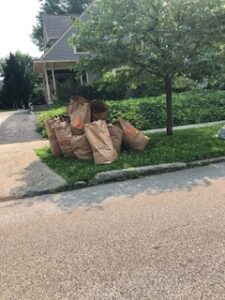 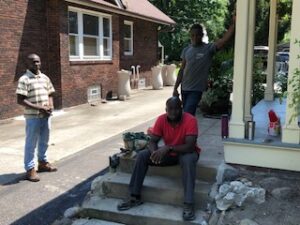 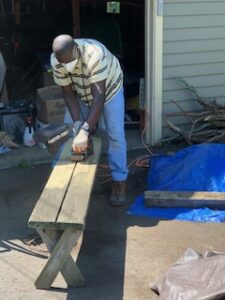 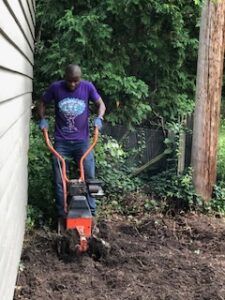 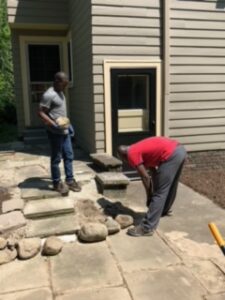 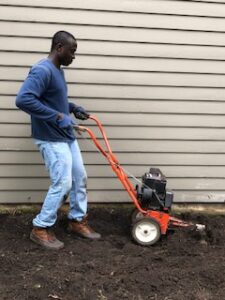 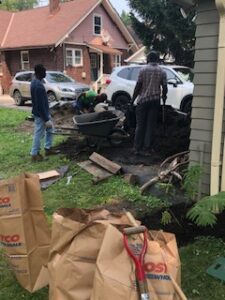 The InterReligious Task Force on Central America brings together people from various faith and secular communities to act in solidarity with oppressed peoples in southern Mexico, Central America, and Colombia through consciousness-raising and direct consumer and political advocacy to build long-term structural change.

HOLA Ohio is based in Painesville with a mission to improve quality-of-life opportunities and empower the Latino community through outreach, education, civic engagement, entrepreneurship, and skills development.

The mission of AMIS is to inspire hope and contribute to the well-being of immigrants and families as they seek legal status in the United States by assisting with resources for legal services, education, basic living expenses, and self-sufficiency.

The ACLU of Ohio is an affiliate of the national ACLU. Founded in 1920, the national ACLU includes more than 500,000 members in all 50 states, making it our country’s foremost advocate of individual rights.

Cleveland Jobs with Justice is a coalition of labor, faith and community organizations working together to promote workers’ rights in the Cleveland area through collective action.

Mennonite Central Committee in the U.S. helps to educate about immigration issues, advocates for sensible humane immigration laws, works to build peace in communities along the U.S.-Mexico border, and provides documentation services to help immigrants navigate the complex immigration system.

MCC LACA facilitates contextual analysis, strategic planning for advocacy, organizational strengthening, and strategic connections between partners.  It supports local and national advocacy action with partners and churches in the region, and with churches and constituency in Canada and the United States to address the structural causes of poverty, violence, and injustice.

Heights Friends of Immigrants supports migrants and refugees locally in NE Ohio.  It provides education and takes action on various initiatives in defense and support of our immigrant sisters and brothers. Meetings are held on the first Tuesday evening of each month in rotation at St. Dominic Church, Forest Hill Church Presbyterian, and St. Paschal Baylon Church.

The Office of Immigration Issues was established by action of the 216th General Assembly (2004) in order to provide legal advice and counsel to mid-councils and congregations regarding immigration issues.  The General Assembly of the Presbyterian Church (U.S.A.) has continued to expand the work of the Office by directing the Office to coordinate advocacy and education efforts and create worship materials.

How We Became A Sanctuary Church

During the first half of 2017, members of Forest Hill engaged Session and the Trustees around welcoming refugees and supporting non-citizen immigrants who live in our communities.  A dinner was held with US Together, an organization helping refugees.  A meeting was also held with representatives from HOLA Ohio, an organization based in Painesville that helps immigrants facing deportation.  Both Session and the Trustees supported these conversations.

After these meetings, a two-to-three-month process for the leadership of Forest Hill Church to decide to become a Sanctuary Church and possibly hosting one or more individuals who are facing deportation was proposed.  This was to be part of the August 28 Session meeting agenda.  However, Rev. Lentz received a phone call on August 5 from HOLA relating an immediate need to provide sanctuary for an individual facing deportation.  This required this process to be fast-tracked.  A special Session meeting was called for August 6.

The individual facing deportation was from the Akron area, had been in the U.S. for over 20 years, worked, and paid taxes.  She was a homeowner.  She had no criminal record.  She had four US citizen children, ranging in age from 4 to 20.  Her oldest daughter was studying at Kent State University.  Years before, she had been given an order of deportation after a fraudulent attorney submitted a poorly done application for a green card, the process to begin a path to citizenship.  She was given a stay of removal in 2011, which allowed her to stay and work in this country.  This stay has been renewed annually at her check-ins with immigration.  When she went for her 2017 annual check-in, immigration officials, without warning, put a GPS ankle monitor on her, telling her she needed to leave the country by September.  This news devastated her family and many in the community.

At the August 6 meeting, Session reviewed what Sanctuary from a biblical, historical, and Presbyterian perspective is.  Sanctuary is an ancient practice of providing refuge in sacred spaces from secular legal action.  There are many scriptural references to provide sanctuary, including Leviticus: “The alien living among you must be treated as one of your native-born” and Matthew: “I was a stranger, and you invited me in.”  In 2016, the PC(USA) General Assembly reaffirmed support for the ministry of sanctuary and the ethical obligations of congregations to defend a family’s integrity when faced with deportation.  The General Assembly called on congregations to provide sanctuary in appropriate circumstances to express the scriptural call to love our neighbor.

During the Session discussion, the logistics for providing suitable living space and amenities and legal issues were reviewed.  It wasn’t known if the woman threatened with deportation would be staying at the church alone or with all or some of her children.   It was noted if we were to go forward that a good communications plan was needed for the congregation and the groups using the church and the community.  The trustees reported that they had already investigated the location and cost to install a shower.  Since the church has a full kitchen in the wing where the living quarters might be located, the woman could cook for herself, provided groceries were brought to her.  It was discussed that someone would most likely need to stay with the woman at night, as we did for our Family Promise guests.

Following the lengthy discussion, it was moved that Forest Hill church provide Sanctuary for whatever length of time was needed to work out the woman’s legal status.  The motion was seconded.

Since this was such a significant decision, Reverend Lentz asked for other references that would help us make this momentous decision. Some of those cited included: “Lord prepare me to be a Sanctuary,” “Give me your tired and your poor,” “Let the children come to me.”

After leading all in prayer, Reverend Lentz asked the Elders to vote either “Yes, I believe this is the will of God for FHC to take this action at this time” or “No, this is not part of God’s will for FHC at this time.”

The motion was unanimously approved.