A pilgrimage is neither a vacation or a tourist’s adventure. Pilgrims open themselves up to the people, the place, and the Spirit as they become vulnerable to the journey and discover a new understanding of the Holy.

The Racial Inclusion Committee sponsored a 4-day pilgrimage to Alabama to experience the history of our nation’s civil rights struggle.  They visited Birmingham’s Civil Rights Institute, the welcome center for the Selma to Montgomery National Historic Trail at the foot of the Edmund Pettus Bridge, the National Memorial for Peace and Justice, the Civil Rights Memorial, Dexter Ave. King Memorial Baptist Church, King’s parsonage home, the 16th Street Baptist Church, and the Birmingham Jail.

Twenty-nine pilgrims from Forest Hill and the Church of the Saviour crowded onto a bus to Memphis for an unexpected journey of discovery. Beginning with the Lorraine Motel where Dr. King was assassinated, the group toured the massive, recently renovated National Civil Rights Museum built around the motel. They met with three iconic leaders who met with Dr. King shortly before his death– business leader Fred Davis, attorney Julian Bolton, and Dr. Coby Smith–who spoke and answered questions about the Civil Rights movement before and after King’s death.

Building on past pilgrimages to the Holy Lands of Israel and Palestine, and tracing the Apostle Paul’s footsteps through Turkey and Greece, in 2013, 25 pilgrims explored the roots of the early Christian church in Rome and Italy. The 8-day trip included 6 days in the extraordinarily beautiful cities of Rome and Assisi.

The pilgrimage to Washington D.C. continued the journey of our 2010 Courageous Conversations on Race and included the Martin Luther King, Jr. Memorial, the African American Civil War Museum, and the exhibit of African American history and culture at the Smithsonian Museum. 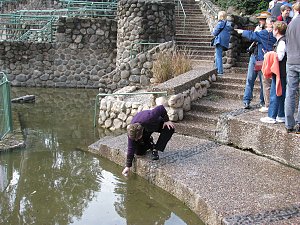 Participants joined Pastors Clover Beal and John Lentz (Ph.D. in New Testament scriptures), along with Timothy Beal (Ph.D. in Hebrew scriptures) for a pilgrimage to the cradle of Christianity in Asia Minor (modern Turkey) and Greece.

The 32 pilgrims to Israel/Palestine prepared for the trip by studying the Middle East with Dr. Peter Haas, and the complicated issues between Israel and its neighbors. They  saw the trip as not only for the individual, but about bringing home the experience for the community so that all might be shaped by it.

In 2008, 20 members and friends from Forest Hill traveled to Abiquiu, New Mexico for a Desert Pilgrimage at the 21,000-acre Ghost Ranch Retreat Center owned by the Presbyterian Church (USA). To learn more about this desert pilgrimage, explore various readings and reminiscences from the trip as well as photographs, visit ghostranch2008.shutterfly.com

Twelve pilgrims traveled to Nicaragua with International Partners in Mission for an immersion experience in the culture of the Nicaraguan people. The group was introduced to projects, both urban and rural, developed and implemented by local women and men to address the needs of their communities.

The first Forest Hill pilgrimage was to the Abbey of Iona, on the Isle of Iona in Scotland. Twelve pilgrims spent one week in July in community with others from all over Great Britain. The days were filled with the rhythm of worshipful work, worship and prayers, communal discussion, and hiking the beautiful island.