In December, 2019, we voted to host 3 young men who had been in a maximum security prison for 8 months while their asylum case, after the horrific massacre of their families in their village in Burkina Faso, was pending in the courts.

Their release was secured after we joined with other community organizations (Catholic Charities, Heights Friends of Immigrants, American Making Immigrants Safe, Jobs with Justice) to raise the $15,000 bond for each man. After Issoufou Lembane, Idrissa Kiema, and Emmanuel Sabo arrived here in January, a French-speaking interpreter helped us converse with our guests.

When offered food, Emmanuel replied, “We’re too excited to eat.” When offered an apology for the treatment they received during detention, Emmanuel said, “We don’t want to look back. We want to look forward.” Issoufou and Idrissa nodded their heads affirmatively. And when Pastor Lentz offered to arrange for two of the men, practicing Muslims, to attend a Mosque, Issoufou replied: “God is God.” 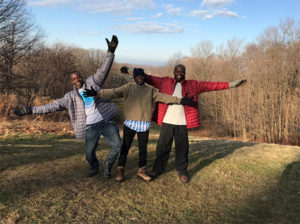 Despite all they have been through, these young men exude humility and love. Words cannot capture their modesty and grace. They have much to teach us, and are eager to learn from us.

Everyone involved has been an agent of God’s grace—the beloved community in action. We thank our Immigration Task Force and their many partners who helped to bring about this yet unfolding story of Christ’s beloved community opening beyond its comfort zone.

How You Can Help
Many who hear these stories are eager to help.

To volunteer to spend some hospitality time with our guests, cook a meal, accompany them for outside activities, or spend the night, email sanctuary@fhcpresb.org

Donations may also be texted to 216-400-5300 or made online through our Breeze Giving Page or Paypal. Please indicate “Sanctuary Movement” in the Comments field.

The Background of Our Sanctuary Ministry

In 2017, we learned of churches, mosques, and temples who were providing safe space for immigrants and Muslims, African Americans and anyone who feels endangered in this country.

At  the same time, our national organization, the Presbyterian Church (USA), published Sanctuary: A Discernment Guide for Congregations* encouraging the “growing movement of immigrant and faith communities who are standing with groups made vulnerable by the current political climate, including immigrants at risk of deportation” and authorizing church to:

resist the newly elected administration’s policy proposals to target and deport millions of undocumented immigrants and discriminate against marginalized communities [by opening] up our congregations and communities as sanctuary spaces for those targeted by hate, and work alongside our friends, families, and neighbors to ensure the dignity and human rights of all people.

Almost immediately, we learned of a potential deportee, in danger of being separated from her four children, who was requesting sanctuary.

With donations from members and friends, we built a family-friendly apartment in our church and offered sanctuary to Leonor for almost 3 years while she waited for her work permit and citizenship filings to finally be granted.