We have all been there, no?

Alone. At night. Wrestling with whatever you are wrestling with: a decision, a direction, regret, fear – almost anything that wakes you up at 2:00 a.m. in a cold sweat.

It’s funny how it always seems to come at night – in the wee hours, when the world is hushed. Perhaps that is the reason: the noise of the day ceases and it is just you. Even if you are lying next to someone, it is still all just you.

Jacob was going to meet his brother Esau the next day. Esau, the one who gave away his birthright to his trickster brother. Guilt and fear fed Jacob’s angst. He hadn’t seen his brother in a very long time; and retribution was a very real possibility.

In the agony of wee hours Jacob wrestles, with himself, with a man, with God (all wrestling is really with God, I think) and in the struggle Jacob is broken, his hip is dislocated, and Jacob is renamed Israel: a name that reflects a struggle for land and identity.

I have always been bound to this story. I feel this story deeply – it’s something uncanny. I know this story….

But s I was “wrestling” with this passage, I Googled “paintings of Jacob wrestling.” And this came up – by Hananiah Harari, an American abstract artist. 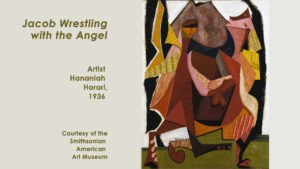 It is titled “Jacob wrestling with the Angel.” Painted in 1936, it hangs in the National Gallery of the Smithsonian Museum in Washington D.C. I have been in that building numerous times and have never seen this. I feel as though it was saved for me for this moment.

Look at it. It is disjointed, like a hip socket thrown out of joint. Is that a tear by what looks like an eye – perhaps a tear of pain? Is that a broken limb at the base of the picture? Is that the angel on the right in pink and red with a small eye looking upwards? A mouth screaming or crying out? A mass of limbs and shapes or things out of shape?

One can’t really tell where one thing begins and the other ends.

The black and the white in the background, perhaps indicating the time in-between night and morning: where tears tarry and linger until the sun rises and joy comes.

These are the things that I perceive, but I am no art critic. What do you see?

I feel the turmoil, the brokenness, the struggle for clarity and control.

And yet the struggle names me and claims me. And in my limp, in my disjointedness, in my wounds, in my pain, there is… what? Redemption, power, truth, insight?

I’ll never forget a story that my mother sent to me years ago. It was about a boy who was strong and healthy and on his way to a normal life when he was in an automobile accident and it paralyzed him from neck to toe. For months he was near death. Even recovered, he would never walk, barely move.

Years later, in an interview he said this (I paraphrase)

It was horrible, to go down and not know if you are going to live… but you know, I wish everybody could go through something like this. You learn who you are, you know what is important, you learn compassion… it is an odyssey to hell and back!

He had been broken. And yet he is NOT broken.

He’s more healed than many of us who live in constant fear of being hurt.

Isn’t it always the case that the people who seem to be the wisest, the most grounded, are those who have suffered, wrestled, and lost, only to be found, and find something. They know something.

Terry Anderson who was a hostage in Lebanon for 7 years… wrote these words:

While no one chooses the kind of terrible events that engulf us, we have much to be thankful for out of those years of testing. We know ourselves, and each other, much better than we might have. We know the depth and strength of our love. And we have a deeper, stronger faith in God. As Nietzsche wrote: “That which does not destroy me, makes me stronger.”

The young boy’s brokenness, Terry Anderson’s devastation, Jacob’s battle with himself and God, and I would add Jesus’ struggle in the garden and wrestling with devil in the wilderness, and writhing on the cross – all transformed these souls, causing them to shine with a deeper beauty now.

Their brokenness has made then more … refined? Perfected?

They don’t wear their pain on their sleeve, or use their experience as some kind of “spiritual exhibitionism” as Father Henri Nouwen called it, in his wonderful little book The Wounded Healer.

I know people, heck, sometimes I am that person who thinks that their experience of pain gives them the right to tell you how YOU are supposed to feel:
“Oh, I know what you’re feeling.”
“You’ll get over it. I did.”

No. Your suffering doesn’t give you the right to tell anyone how they should be feeling.

However, the experience of pain, being broken, suffering touches a common depth. It can be redemptive and build compassion – a deep mystical faithful connection with the pain of others and the pain of the world. I have known pain, so I stand with those in pain.  Even in my privilege I have bumped into brokenness. It is a start anyway.

Making one’s own wounds a source of healing, therefore, does not call for sharing of superficial personal pains but for a constant willingness to see one’s own pain and suffering as rising from the depth of the human condition which all people share.

I think is why Jesus showed Thomas his scars after the resurrection.
I think this is why John Lewis had such power. He used his experience to identify with every person broken by the system. It is why Harriet Tubman could liberate, and Fannie Lou Hammer could lead the marches.

Wise people who have learned the true lessons of suffering don’t blame, and don’t give cheap advice. They become rocks of truth and guiding lights of hope. They become powerful.

Henri Nouwen shares a story from the Jewish Talmud:

Rabbi Yoshua ben Levi came upon Elijah the prophet while he was standing at the entrance of cave… he asked Elijah,“When will the Messiah come?”

Elijah replied: “Go and ask him yourself.”

“Sitting at the gates of the city.”

“He is sitting among the poor covered with wounds. The others unbind all their wounds at the same time and then bind them up again. But the Messiah unbinds one at a time and binds it up again, saying to himself: “Perhaps I shall be needed: if so, I must always be ready so as not to delay for a moment.”

The Messiah sits among the poor, binding his wounds one at a time, waiting for the moment when he will be needed.”

So, it is true for you and for me, followers of the Messiah, we who, as Nouwen wrote, are called on to make visible: The first vestiges of liberation for others, we must bind our own wounds carefully in anticipation of the moment when we are needed.

You and I need to name and claim and take care of our own woundedness, you see, knowing that taking proper care our own stuff, naming and claiming our own pain, and not running from it, is how we move into the world with compassion, love, hope even joy.

Our own brokenness is the source of our own holy power!

So, give up this notion that you can “fake your way to fine” or cover up your pain in false optimism, or worse, bleed over everyone else with your own untended wounds.

I want to stay away from suffering. I would just as soon stay away from wrestling. I want things to come easy. But there is something to the saying: “no pain, no gain!”

William Butler Yeats the British poet wrote about the Incarnation of God:

But love has pitched her mansion in the place of excrement;
For nothing can be sole or whole that has not been rent.

Only through tearing can you be sole or whole. Only when God is born into the brokenness of the work – is salvation loosed.

Leonard Cohen, the Canadian poet and song writer wrote one my favorite verses of all time. He knew that only through the imperfections–the brokenness, the cracks–can light find a way:

Ring the bells that still can ring
Forget your perfect offering
There is a crack, a crack in everything
That’s how the light gets in.

It is in Christ’s brokenness that we are healed. It is through Christ death that we find redemption. It is in God’s death that we have life.

Life happens. Pain happens, you see. And God calls us through the pain, to “ring the bell that still can ring.”

You and I live in a world right now that is dislocated by pain.

Nouwen uses the lyrics from the song “Epitaph” (by the 70s group King Crimson) that speaks to the truth for so many:

How can we bind up the broken hearted, mend the wounds, be the repairers of the breach, the mender of the streets in which we live?

Suffering in isolation produces violence. But suffering out loud in community produces hope. I don’t know why that is so, but it is.” “The church and synagogue,” he writes, “are one of the few places that can turn anger into energy.

We see this, don’t we, in the cataclysm of our current madness? For too long communities have suffered and have NOT been heard. We have sown the seeds of silent suffering, and we are reaping the whirlwind of virulent violence.

But voices crying out in community: Black Lives Matter, for instance – now there is power to change the world!

Near the end of his wonderful little book Nouwen wrote:

Jacob at the Jabbok is broken and re-named. He goes off to meet his brother limping.

But the moment is liberating. The night is over; a new day has begun.

No longer under the illusion that he can run anywhere; he limps towards reconciliation.